Dia has nearly 5,000 stores across Spain, employs nearly 25,000 people and has sales more than €5bn. It also shares its name with an incredibly common word in Spanish, the word for “day.”  So how can you monitor a brand name so overwhelmed with background noise?

When you monitor the internet just for the search term “Dia”, you can receive in excess of 600,000 mentions a day. Of these, just 1% are about the supermarket, making monitoring of the brand’s online welfare extremely difficult.

In what is doubtless a coup for Dia, one of the many ways it’s possible to distinguish conversations about the supermarket is to look for a “%” sign following the Dia, used by some people to clearly identify the brand. But using the % symbol is just one of a host of ways in which Websays was able to narrow the scope of the digital conversation to ensure only relevant social clippings were included.

Dia has provided an online delivery service for food and home products for three years now, but has more recently moved into the realms of furniture, putting it directly at odds with the much larger, and better established, online market place, Amazon. Dia intend to sell more than 5,000 non-food products.

Amazon itself is treading on the toes of Dia in Spain, having announced this week that it will begin delivering a wide range of food and cleaning products, typically the domain of more conventional supermarket chains.

The Dia Group director of digital strategy Juan Pedro Agustín is reported in El Economista as saying:
“The presence of Amazon does not change our decision to continue with our plans because we go at our own pace. We would go faster, but you can not throw the empty or make monstrous investments.”

The move has led social media commentators to make their own comparisons between the two competitors, with a huge spike in people mentioning Dia in conjuction with Amazon across social media platforms. 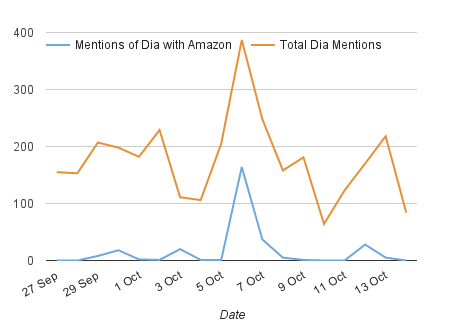 The amount of people mentioning Dia spiked on 6th October, when Amazon announced they would being delivering food and cleaning products. Clearly the comparison and potential damage this could do to Dia’s business was foremost on people’s minds.

On 6 October, Dia was mentioned 387 times online. Of these, it was mentioned in conjunction with Amazon in 164; more than 43% of mentions. This was up from mentions of the two together being completely nonexistent in previous days. 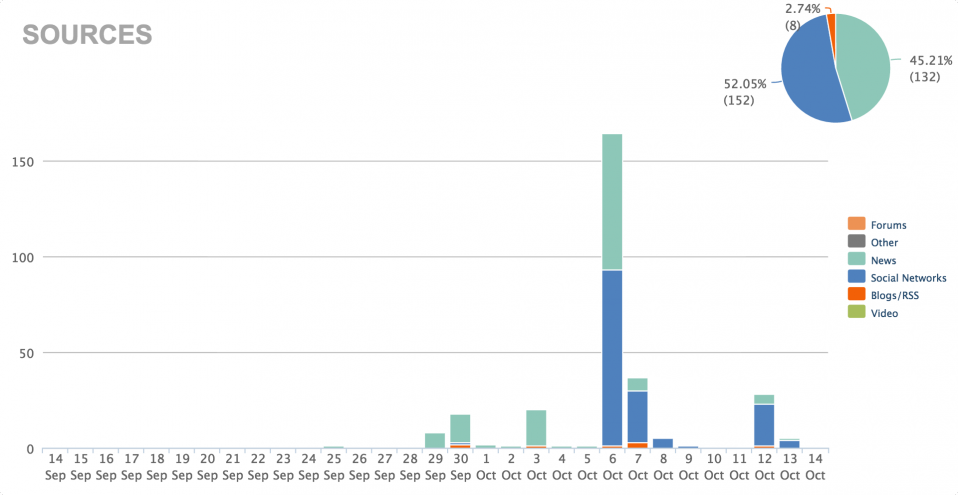 The comparisons were driven by news organisations, a comparison which was picked up and shared on social media. A little more than half (52%) of mentions of Dia and Amazon came from news publishers, whilst 45% of the remainder came from social media posts. Less than 3% came from forum posts.

What do you make of Dia and Amazon’s competition?