“Yes, Together” (translated from Junts pel sí) the Catalonian independence coalition , are set to sail to victory at the end of the month whilst Garcia Albiol, the far right candidate, has been causing some significant controversy on social media.
The Yes, Together coalition has had the most impact on social media in recent days, and the two parties for independentism have more mention than the five unionist parties together.

In this instance the donkey is symbolic of the Catalan independence coalition, whilst the bull represents the unionists.

The most controversial party is the People’s Party, a right wing unionist party, with the nearly 1 in 5 mentions containing negative sentiment towards the party (19.5%).  For Party C, or Party of the Citizens, the rate of negative comment has been 10.6%.

The party with the fewest negative comments is CUP, a party pushing for independence. However, this could be due to it gathering less media exposure and not being viewed as a serious contender, thus reducing its exposure to critics.

Intriguingly, often the party leaders are more popular than the parties themselves, something you might not expect in an election so focussed around one key issue. 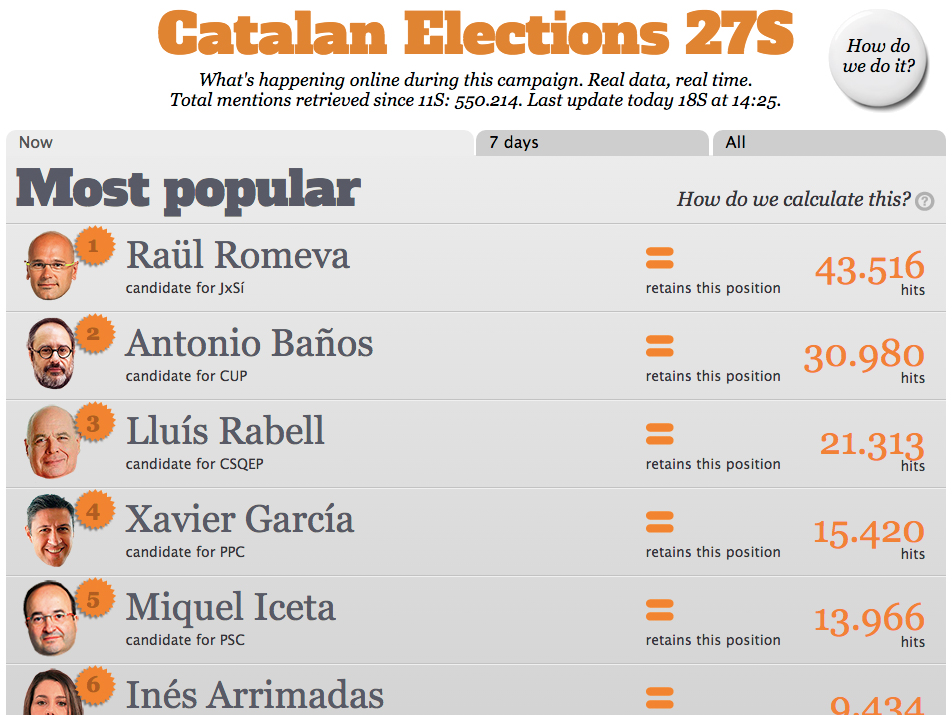 Yes, Together, derive their name from the options they want voters to tick on November 9th. Yes, I want Catalonia to be a state, and yes, I want it to be independent.

Websays is a pioneering web listening service, using a unique combination of data analytics, machine learning and human analysis to provide the most accurate and interesting social media analysis in the world.

It’s this groundbreaking technology we hope to use to predict the results of the Catalonian Elections at the end of September. We believe we can do this with a level of accuracy currently lacking from more antiquated methods of opinion polling.

These elections will determine the makeup of the 11th Parliament of Catalonia, decide who the next President of Catalonia will be, and quite possibly propel Catalonia further down the path to independence.

With Scottish nationalists no doubt looking on with great interest and Cameron promising to not recognise Catalonia as an EU state, what effect will this election result have on politics in the UK and across Europe?

Websays has been perfecting its unique analytical approach over a number of years and has a number of instances of successfully and accurately predicting election results based on social data.
When predicting the 2012 Catalan elections we were able to accurately predict the winner of the Catalan Presidency to within just a few percent. You can find our other analyses of this election here. 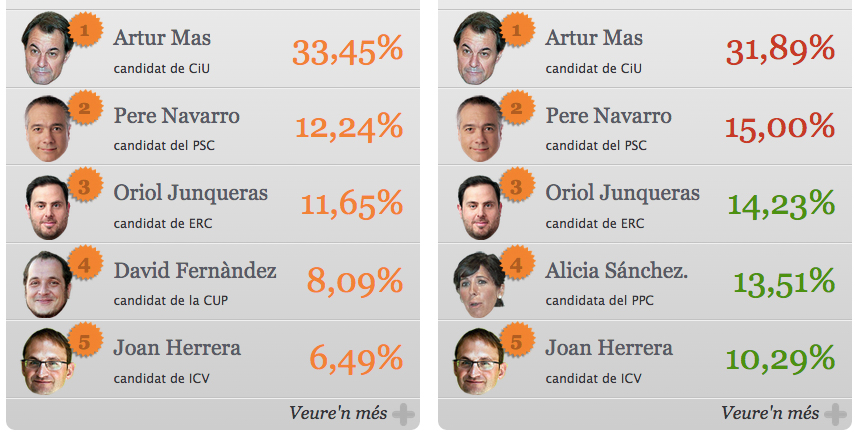 In 2013 we worked with Tiscali and BT to predict the outcome of the Italian election. Whilst pundits were predicting the furore around Beppe Grillo would fizzle and die, Websays maintained that his popularity on social media was no fluke.

Grillo’s party then scooped up the second largest portion of the popular vote, much as Websays had predicted.

More recently we were also able to predict the winner of the controversial Tower Hamlets election in June this year.

Eagle eyed readers will no doubt have noticed the significant discrepancy between Peter Golds’ predicted share of the vote, and the share he actually got. We were able to predict his third place spot, but a number of Twitter accounts disproportionately tweeting proGolds sentiments threw our analytics. This has been remedied, and won’t be an issue in our analysis of the Catalan elections this September.

You can read more of our analysis and some of the interesting things we found during the Tower Hamlet’s election here.

The 2015 Catalan Election is set to be one of the most exciting in Spain’s history, with tremendous possible consequences for Europe and the UK. You can follow Websays’ groundbreaking, real time analysis of the election here.

Subscribe to our various newsletters here! Our politics newsletter will keep you up to date with what we feel is interesting in online politics from around the world. If you'd like to keep abreast of brands' campaigns, crises and developments, our brands newsletter is the one for you. Got the ol' wanderlust? Perhaps our travel newsletter will satisfy you. Or check out our smart cities newsletter to see how technology like Websays analysis is helping cities to better serve their citizens. Or sign up to all four!