Twitter has become an essential part of life for those of us narcissistic enough to believe that the world really cares what happened on our commute to work. With fewer than 140 characters we can put our fascinated followers at ease that, yes, I did remember to take my lunch with me to work today. But what if you could use Twitter to ask the council when rubbish is collected, make a suggestion to local authorities or report broken streetlights? And if you could, would you?

This is precisely what a small town in southern Spain has undertaken, led by their mayor, Jose Antonio Salas. Since launching the initiative in 2011, Salas has encouraged the 3,500 citizens of Jun to join Twitter, and have their profiles verified at the local council.

This is quite different to the verified “blue tick” that journalists and celebrities so covet on Twitter, the verification is only done locally, so that the local government know who is actually a local in Jun. Once this has been done, residents can tweet Mayor Salas or other members of the local establishment in order to receive assistance or advice, as in this exchange helpfully translated by the Huffington Post. 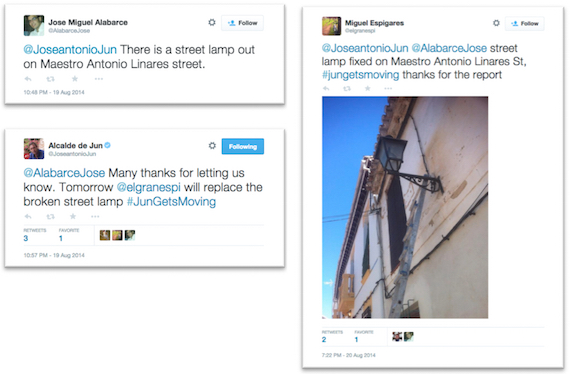 As you can see, when the Mayor is tweeted with the news of a broken street light, he replies swiftly adding in @elgranespi, the local electrician. The following day, @elgranespi tweets back with a picture, showing that the street light has been fixed.

Mayor Salas has nearly 400,ooo followers on his mayoral Twitter account, more than 100 times the population of Jun. He is also quite active on Instagram, where he has more than 10,000 followers.

The technology is not particularly innovative or new, people tweet local councils and authorities on a regular basis no matter what city you’re in, and the Salas has been encouraging locals to tweet their problems at local councils for four years now. That said, Jun is surely remarkable in its bid to ditch bureaucracy and move to a new, two way system of communicating with its citizens.

The system in Jun works well for the residents, according to what Mayor Salas told Time back in June:

“Who valued the street sweeper’s work before? Now, the street sweeper is able to interact with citizens, solve the problems brought forth on Twitter and, very importantly, his work for the community is made visible.

“This has led to great efficiency among the employees’ and citizens’ recognition.”

The public nature of Twitter means that good work is rewarded instantly online, with pictures of the fixed street light being retweeted to publicise the reliability and skill of the electrician. Had the light not been fixed however, the lack of action would have been very public, and doubtless noticed by local citizens, who would likely lose faith in their handymen, and their mayor.

The public nature of the exchange, which can be screenshotted, shared and copied for further evidence if needs be, encourages local services and politicians to be the best, and most honest, they can be.

But how scalable is this model? If it truly does work for 3,500 citizens under one mayor, could it work for 5,000? Or 50,000? According to the Huffington Post, Salas receives around 60 tweets from citizens a day from just 3,500 citizens. This could quickly get completely unmanageable; Ada Colau would have some significant difficulty responding to every message from all 1.6million of Barcelona’s citizens.

That said, Jun is undoubtably a model local government and smaller townships can aspire to, in the hope of using social media to becoming smarter, more transparent and more useful to citizens.

Makes the do my homework for me common injunction to writers, know your audience, only?